If you have a strong mind and plant in it a firm resolve, you can change your destiny.
Paramahansa Yogananda

Paganini on his death bed 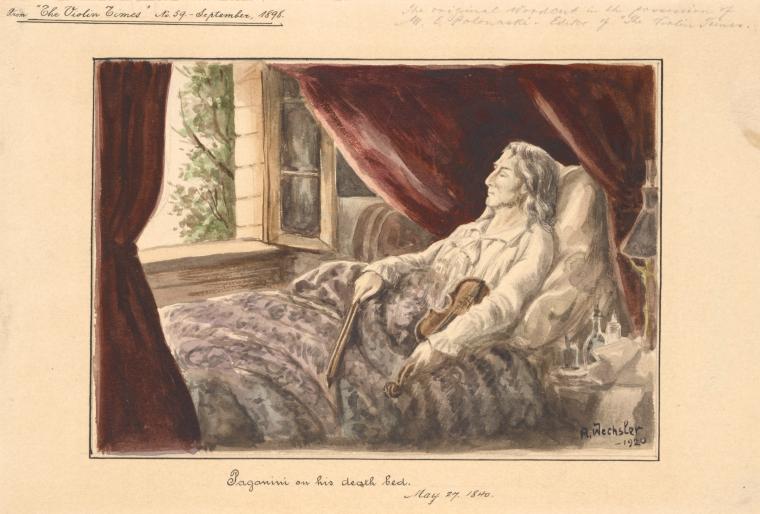 If you would like to join the next One Year Left Group, just fill in the registration form by CLICKING HERE.


"Death destroys a man, the idea of Death saves him."
E.M. Forster

Since ancient times, we have been reminded that our physical existence on this earth is limited. From Socrates to the Dalai Lama, we are admonished to practice dying, prepare for death.  All of the major religions teach that this life as we know it is not permanent and that we should prepare for what comes afterwards.  In the Hindu tradition, the belief is that a person's death reflects one's life.  A well-known example is the assassination of Mahatma Gandhi.  After being shot in the chest three times and before he died, he repeatedly stated the name of Ram, the Hindu deity representing compassion, courage, and devotion to religious values and duty.  As he died, Gandhi reflected the same compassion, courage, and devotion he had practiced during his life.  He had prepared for his death.

Another recurring theme of writers and philosophers has been that life and death are intertwined: an appreciation for the richness of life cannot be grasped without a true consideration of death.  Here is a small sampling of what I mean: "It is only in the face of death that man's self is born." (St. Augustine) and "No man enjoys the true taste of life but he who is willing and ready to quit it." (Seneca)  In more modern times, Muriel Spark wrote: "If I had my life over again I should form the habit of nightly composing myself to thoughts of death. I would practice, as it were, the remembrance of death. There is no other practice which so intensifies life. Death, when it approaches, ought not to take one by surprise. It should be part of the full expectancy of life. Without an ever-present sense of death life is insipid. You might as well live on the whites of eggs."  Recent movies, songs and books, e. g.,  The Bucket List starring Jack Nicholson and Morgan Freeman, Live Like You Were Dying by Tim Nichols and Craig Wiseman (performed by Tim McGraw), and The Last Lecture written by Randy Pausch give us the same message in modern cultural contexts.

What do these writers (and a multitude like them) mean by terms such as "... man's self is born ...", "... the true taste of life ... ", "... intensifies life ...",  "... the full expectancy of life.", and "... Death saves him."? The philosopher Martin Heidegger explored the concept of death enriching life and concluded that humans exist in this world in one of two states: 1) a state of forgetfulness of one's own being, i. e., concerned with the everyday "idle chatter" of life, the way things are, or 2) a state of mindfulness of one's own being, i. e., concerned with that things are, that one exists and is responsible for one's being.  The first state Heidegger called "inauthentic" and the second, "authentic."  In the authentic state, a person becomes fully aware of him/herself as a transcendental, as well as empirical, being; embracing his/her possibilities/limitations and other existential paradoxes of life; being anxious in that embrace; and thereby, being fully alive.  For Heidegger, moving from forgetfulness to mindfulness, from inauthenticity to authenticity is brought about by the experience of death.

However, is it possible to simulate that "geologic uplift" BEFORE receiving the fateful news?  Based on the experiences of my clients, my own experiences, conversations with others, readings, etc., I believe that it is possible.

Inspired by those individuals I have known whose lives have been touched with the reality of death — either facing the end of their own life's journey or living a life changed because of the death of a loved one — and those who wish they had a structured means to explore their own mortality, I have created a year-long class called One Year Left. This group/class provides a time and place where participants have the chance to live one year as if it were their last; to examine their personal life and world; to explore and travel their own journey to a more authentic, mindful existence; and to enter into a new relationship with life that is richer, fuller, and more wondrous.  It is that chance "... to live like you were dying."


What are the Specifics?

Number of participants: Minimum of 6, maximum of 9
Qualification: Open to anyone over 21 years old, subject to an interviewing process
Total number of meetings: 21 during a 12-month period
Time: 6:30 p.m. - 8:00 p.m. (except for field trips)
Individual meetings: 1 hour per month included
Activities: Reading, journaling, meditating, guest speakers, field trips, group discussions, creative arts, etc.
Location: 4833 Spicewood Springs Road, Suite 101
Cost: $2,000 per person: $1,000 deposit at time of acceptance, $1,000 due one week before the start of the class/group; plus the cost of books and other materials
Refund policy: All monies refunded if there are fewer than 6 participants one week before the group begins

For more information or to register, please fill in and submit the form, contact me by phone at (512) 658-2674, or email me at This email address is being protected from spambots. You need JavaScript enabled to view it..